High resolution test with the Piclop

I mentioned the Piclop on the 3D scanning subreddit and ComeOnDoolittle asked me about scanning some rather unusual objects: stone arrow heads or spear points.  Sadly,  I didn't have either. As a substitute I tried scanning a couple of small rocks, but the results weren't really all that interesting and I wasn't sure they would be applicable, though ComeOnDoolittle was satisfied with the early results.

Enter eBay, where it's well-known that you can buy anything, including stone arrow heads (spear points too, but they're quite a bit more expensive). Many are quite pricey, but after a little shopping I found a nice-looking one described as an "Authentic Missouri arrowhead", selling for the very reasonable sum of $2.99. Although shipping almost doubled that, an arrow head for $6 seemed like a good buy.

As soon as it arrived, I realized that I'd need some kind of support in order to put it on the scanner turntable. I've seen people use clay or blu-tack in order to anchor objects, but I didn't have either one handy, so I improvised with some stiff wire wrapped around the base. That's visible in the scans, I think it could be edited out. Still, some clay would be a better bet. And of course the arrow head would need to be turned over and have the base scanned too in order to get a complete picture; I haven't done that yet. Here's what it looks like mounted to the turntable: 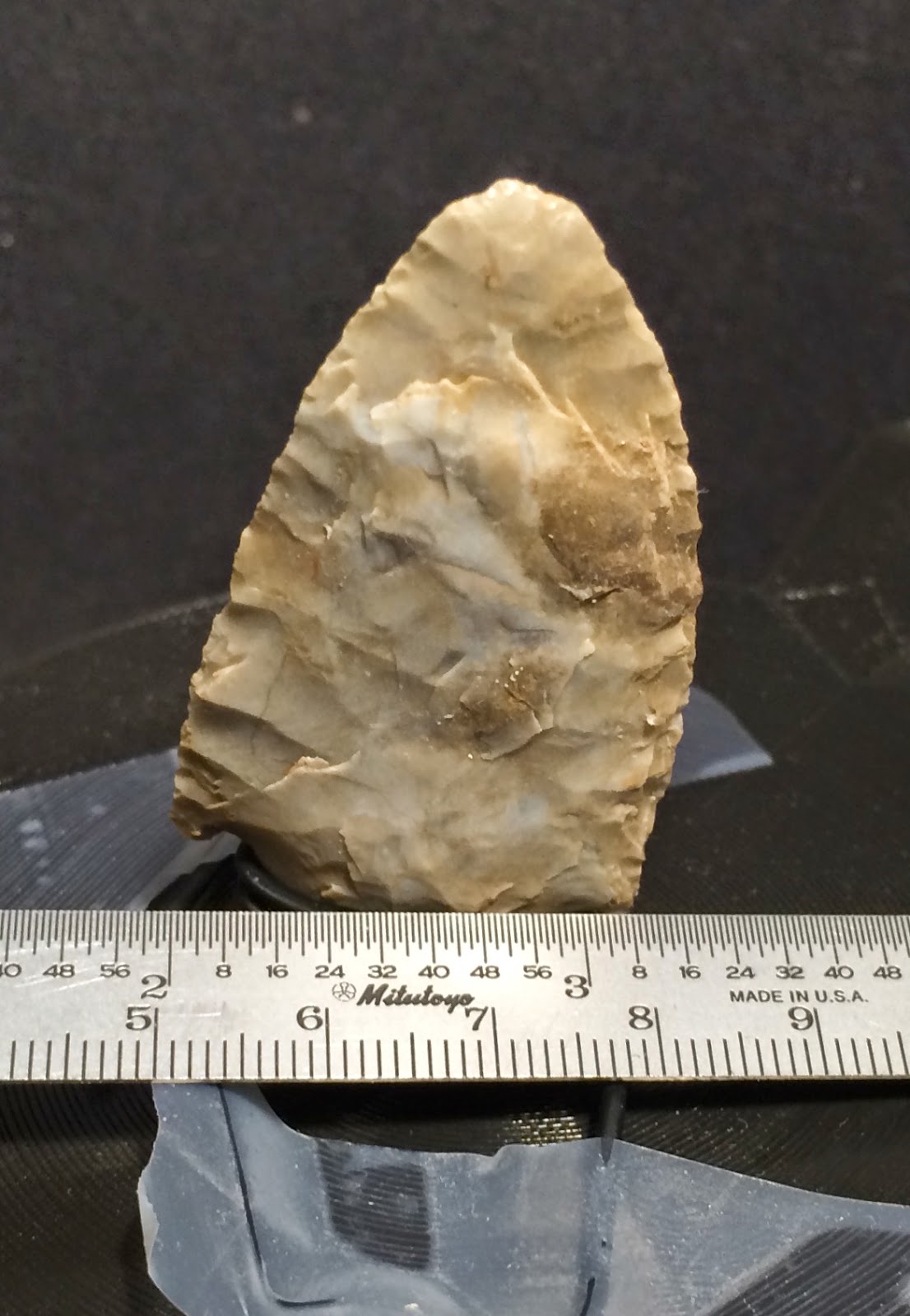 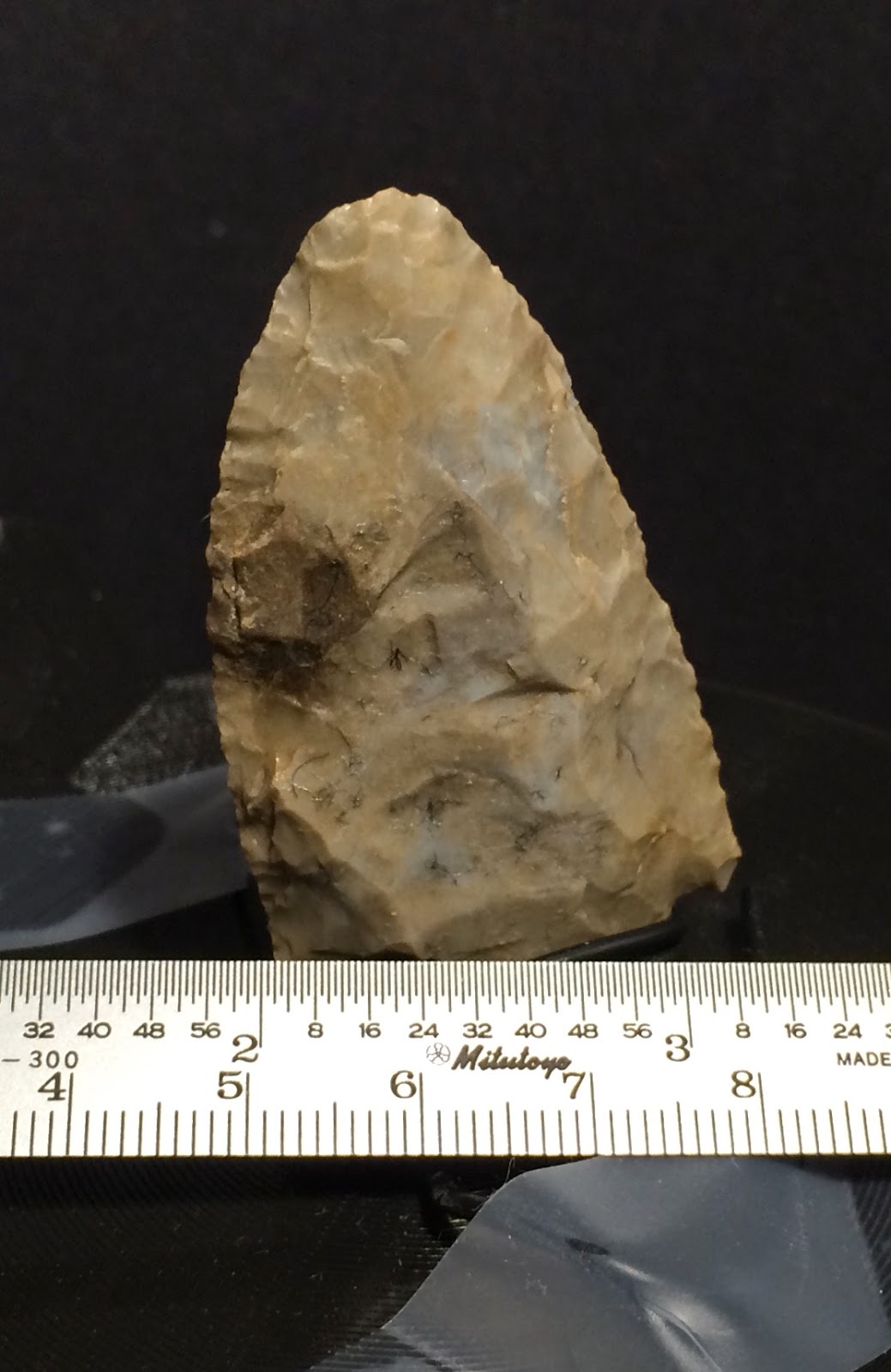 I've used the arrow head for several tests now, leading up to the first attempt to do a full-resolution scan with both lasers, 5 megapixel mode on the camera and 3200 steps/revolution. And here's what that looks like: 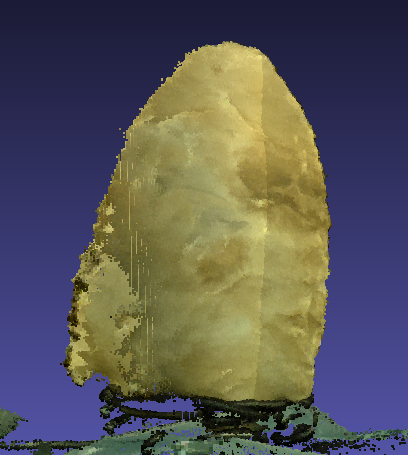 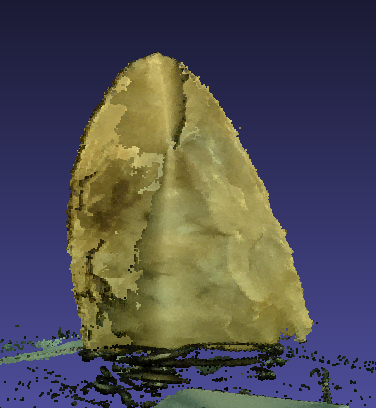 I am impressed with the quality that the scanner has been able to achieve. There's actually a bit less detail in the point cloud than it appears, because the color changes trick the eye into thinking that there are shape changes too; nevertheless, the scanner managed to get the proportions right and avoid any extraneous points. The edges are pretty sharp too, just like the original.

There was also a question on the Google+ ATLAS group about how much CPU load the Raspberry Pi 2 was under. I installed a simple monitoring application called RPi-Monitor and used it to display the load average during the scan:

I started the scan at 22:22 and it finished at 01:44. The long-term average during the scan was about 0.6, but RPi-Monitor itself puts a background load on the machine of 0.2-0.25, so the actual usage by FreeLSS is less than 0.5 for the scan, and about 1 during the final processing. When I was monitoring the load average at the CLI, before installing the monitor software, I was seeing those kinds of levels; the processing peaked at about 0.9 or so. Since the processing is taking most of one CPU and the Pi 2 is 900 MHz versus 700 for the B+, I think that means there is a speed-up during that phase. Of course, if the processing step could be multithreaded the difference would be much more dramatic.

And for anyone who would like to play with it, I've posted the compressed PLY file on Drive:  1424913318.ply.gz  Be aware that it is a 24 MB download and will uncompress to 83 MB. I've been using Meshlab to view all the PLY files, though I confess that I don't know enough about the program to do anything other than look at them, yet. That's the next thing to learn. . .