The last few weeks have been exciting - at least, if you get excited about 3D scanners that you can build at home. In the past have been plenty of announcements of 3D scanners, either using multiple cameras or lasers, including fully commercial models and ones that were introduced through crowdfunding. But they've mostly been closed-source and expensive. 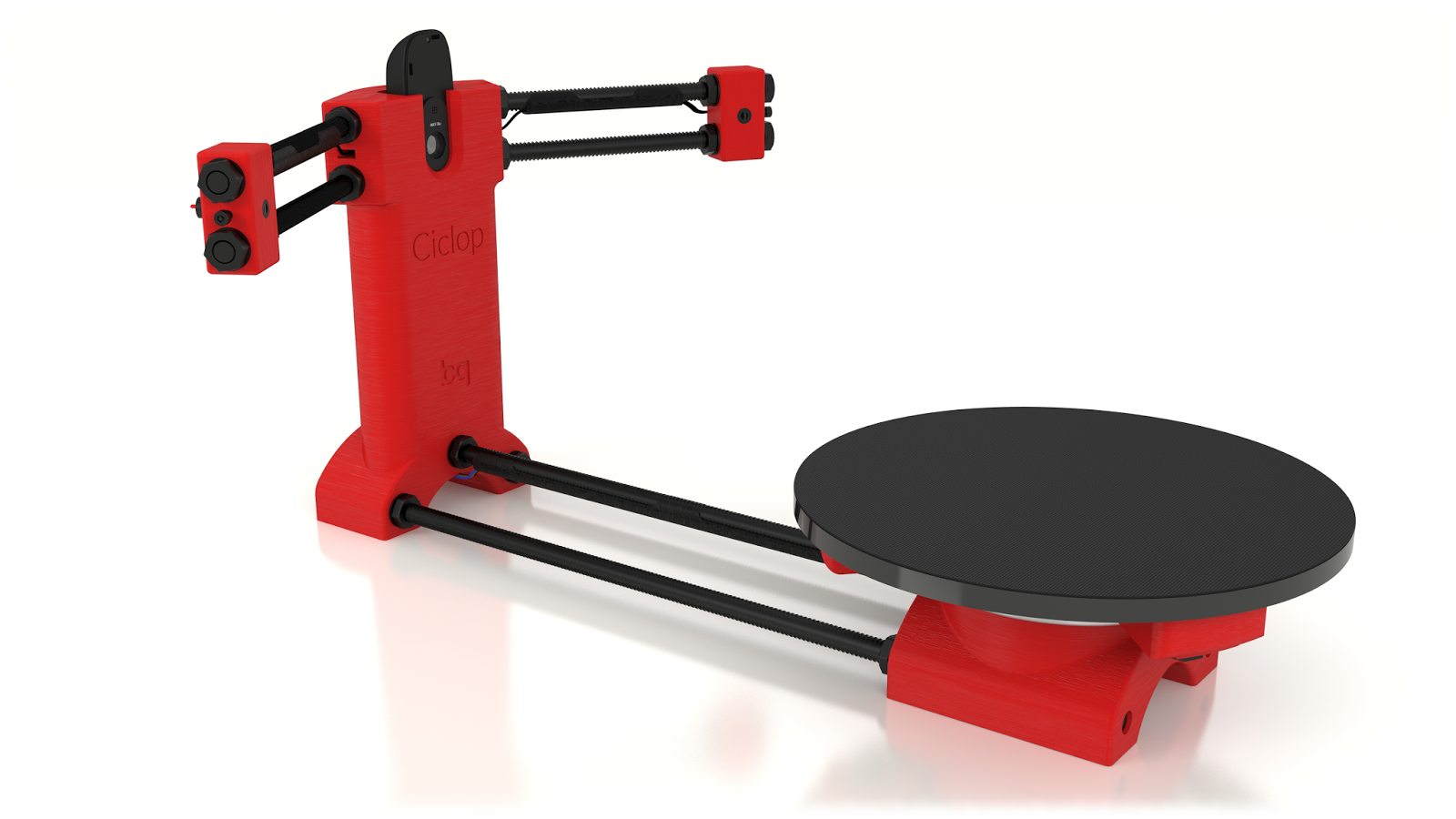 The announcement that started the excitement was the CES 2015 announcement of Ciclop, from Spanish company BQ. The primary parts of the scanner are mostly printable on standard home 3D printers or available at hardware stores (though with one notable exception) and the electronics are based on BQ's nice-looking Arduino board (the ZUM BT-238) and a custom shield (the ZUM SCAN). The camera is a Logitech USB webcam, and the entire assembly is orchestrated by BQ's Horus software, running on Linux or Windows (and with future possibilities for OS X, since it's written in Python).

The second new scanner is the ATLAS, brainchild of Uriah Liggett. Rather than using the ubiquitous but somewhat underpowered Arduino, he wrote his software for the Raspberry Pi, a package called FreeLSS. To go with FreeLSS, Uriah designed a scanner that can be almost entirely printed, and decided to fund further development with a wildly successful Kickstarter that has raised more than 60x his original goal. The Pi already had a nice camera module, and Uriah designed a simple board to let the Pi control the stepper and lasers, analogous (and similar) to the ZUM SCAN.

As far as I'm concerned, each design has strengths and weaknesses. I like the Ciclop's mix of printed and manufactured parts; the custom pieces are natural choices to be printed, and using threaded rod for the structural bits is inexpensive and solid. Their choice of 8 mm rod is especially convenient for those of us in the non-metric US, since 5/16" rod is a perfect substitute. The only difficult piece is the large 16014 bearing that supports the scanning turntable. It's a very good idea; the bearings in the stepper motor aren't designed to hold up a heavy item while it is being scanned, and relying on the 5 mm wide shaft as the only support for the turntable is a recipe for wobble and long-term wear problems. The bearing appears to be a common one, too, but unfortunately the price varies all over the place; I've found them as low as $10 (albeit with $9 shipping) and as high as $105. Apparently they're used for ATVs and similar vehicles, and I imagine that enthusiasts have opinions about which work best for them. For a scanner turntable, I think the $10 version will be fine!

What I don't like about the Ciclop is the requirement for a dedicated computer to run the scanner, on top of the Arduino/shield/webcam combination. The ZUM Arduino board costs $40 US (plus unknown shipping), I'm guessing that the shield will probably be $30 based on the components. Add the webcam and you're up to around $100; on top of that, you need a computer to which the scanner will be tethered with USB.

The ATLAS has the opposite set of problems. I understand the desire to print as much of the machine as possible, but in my opinion making the frame out of a dozen pieces, all of which have to be screwed together, is taking the concept too far. The Ciclop uses a couple dollars worth of threaded rod and nuts to save hours of printing and effort, and the frame will certainly be stronger and stiffer. Although some of the design details are still being filled in, it also appears that the ATLAS turntable is only attached to the stepper motor.

On the other hand, FreeLSS looks like a great solution. A Raspberry Pi replaces the Arduino and the attached PC, handling both the machine control and processing tasks (yes, it looks as though the new Pi 2 will do an even better job, but nobody has been able test it yet). A simple adapter board holds a standard stepper motor driver module (the Allegro A4988 that most of us rely on for our 3D printers) and a Darlington transistor pack that lets the Pi switch the lasers on and off. The system is designed to be networked and headless, accessed via a webpage that it serves up. The Pi camera has higher resolution than most any webcam and, at $30, costs even less. Its ribbon cable is not as friendly as the typical USB round cord and the one that ships with the camera is too short, but replacements are readily available. All together it is a straightforward, inexpensive and powerful package.

The best thing about both projects, of course, is that they're entirely Open Source. Ciclop is Creative Commons licensed (CC-BY-SA) and both Horus and FreeLSS are GPL; ATLAS hasn't yet been released but is promised to be open. That means I can take whatever I think is best out of both of them, and that's what this project is all about; a physical design based on Ciclop (with some modifications) and driven by FreeLSS on a Raspberry Pi. Hence, Piclop!

In the next post I'll talk about the printing that I've done so far, and the parts that I think need to be reworked or redesigned, as well as the initial BOM and sources for the electronic parts. One other note; the ATLAS Kickstarter is wrapping up as I write this, but there's still time to get in. Although I'm not using all the same parts that Uriah is sourcing, I believe that everything he's chosen would work fine for the Piclop, and his professionally made boards will be a lot nicer than the homemade versions that I'll be making. Even if you don't want a parts kit, a contribution to the project is certainly worthwhile given the effort he's put into making FreeLSS available for all of us to use.