Camera holder for the Piclop

My early experiments with the Piclop were done with scotch tape holding the camera module onto the front of the tower; that worked, but obviously wasn't going to be a satisfactory solution. I planned for a simple mount that would hold the camera right against the front of the tower, but after a few scans discovered the need to adjust it at least a little. The camera module needs to be perfectly vertical when viewed from the side; in other words, parallel to the Y axis, which is perpendicular to the turntable surface. It also needs to be aimed directly at the center of the turntable, using the "Camera" screen in FreeLSS and lining up the red cross-hair to hit the center. And that cross-hair also needs to be vertical, which I measured by putting a square on the turntable.

The camera mount I've come up with is easy to print and install, solid, and allows fine motion for two of those adjustments. However, it can't adjust the third, and in that respect it is somewhat lacking; I have a workaround, but ultimately it may need to be replaced with a better design. The files are on Thingiverse: http://www.thingiverse.com/thing:691191 It's still a work in progress because of the limited adjustments; in the meantime though, here's what it looks like. 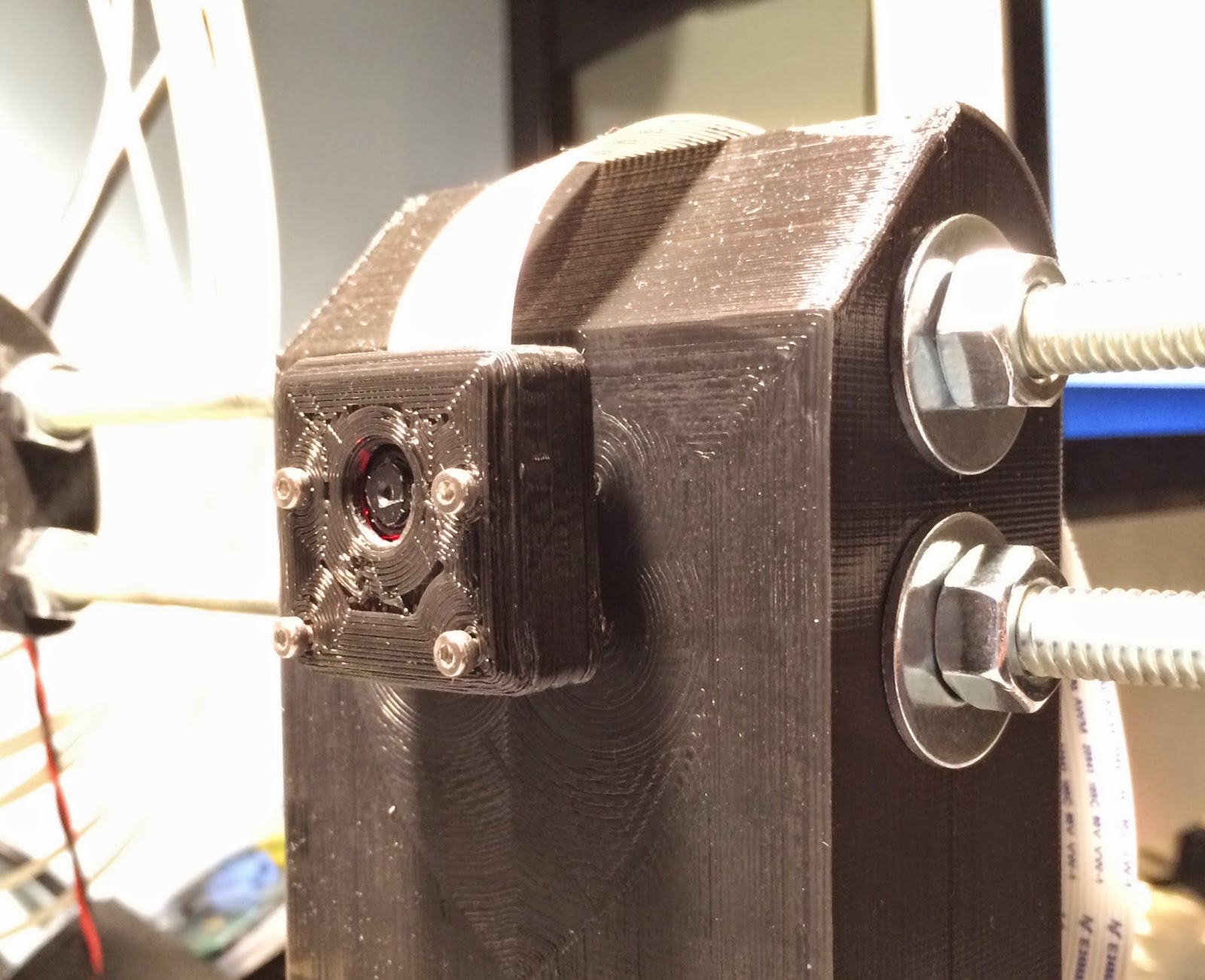 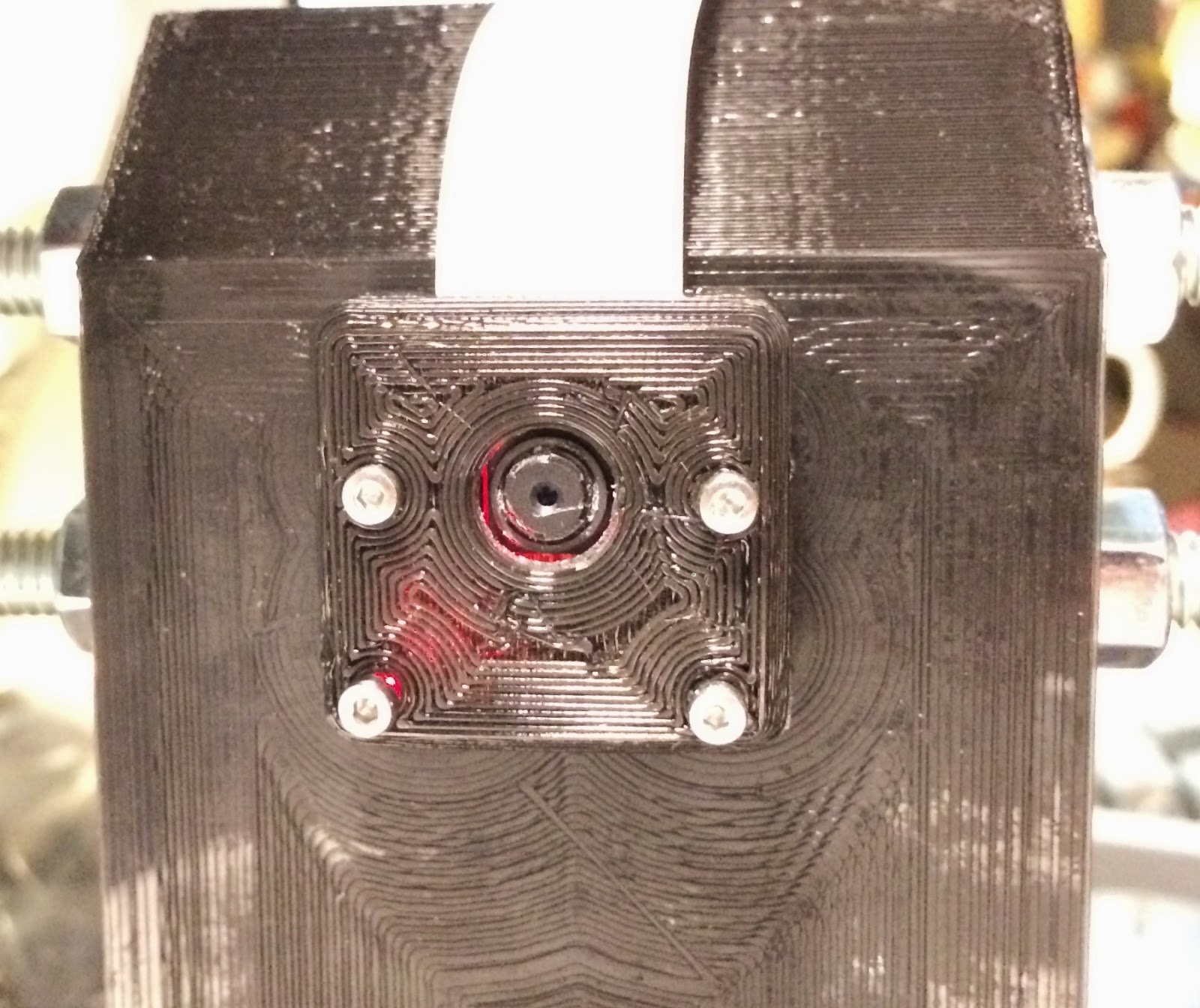 My apologies for the overexposed pictures; it's really hard to take good photos of shiny black PLA. As you can see, the case is very simple, printed in two halves that snap together to hold the board. The four mounting holes on the board line up with holes in both halves, and M2-20 screws pass through all three and thread into the camera tower.

The case is held away from the tower by a ~1 cm square of closed-cell foam about 4 mm thick, cut from a piece that some electronic components were shipped in. The idea is to provide a little spring effect between the tower and the case, so it will be held against the screw heads and they can be tightened or loosened to adjust its position. Four small springs under the screws would do the same thing, but the foam seems simpler.

The first adjustment I made was to line up the case vertically, by setting a square on the table and making sure that the front of the case was parallel to its edge. 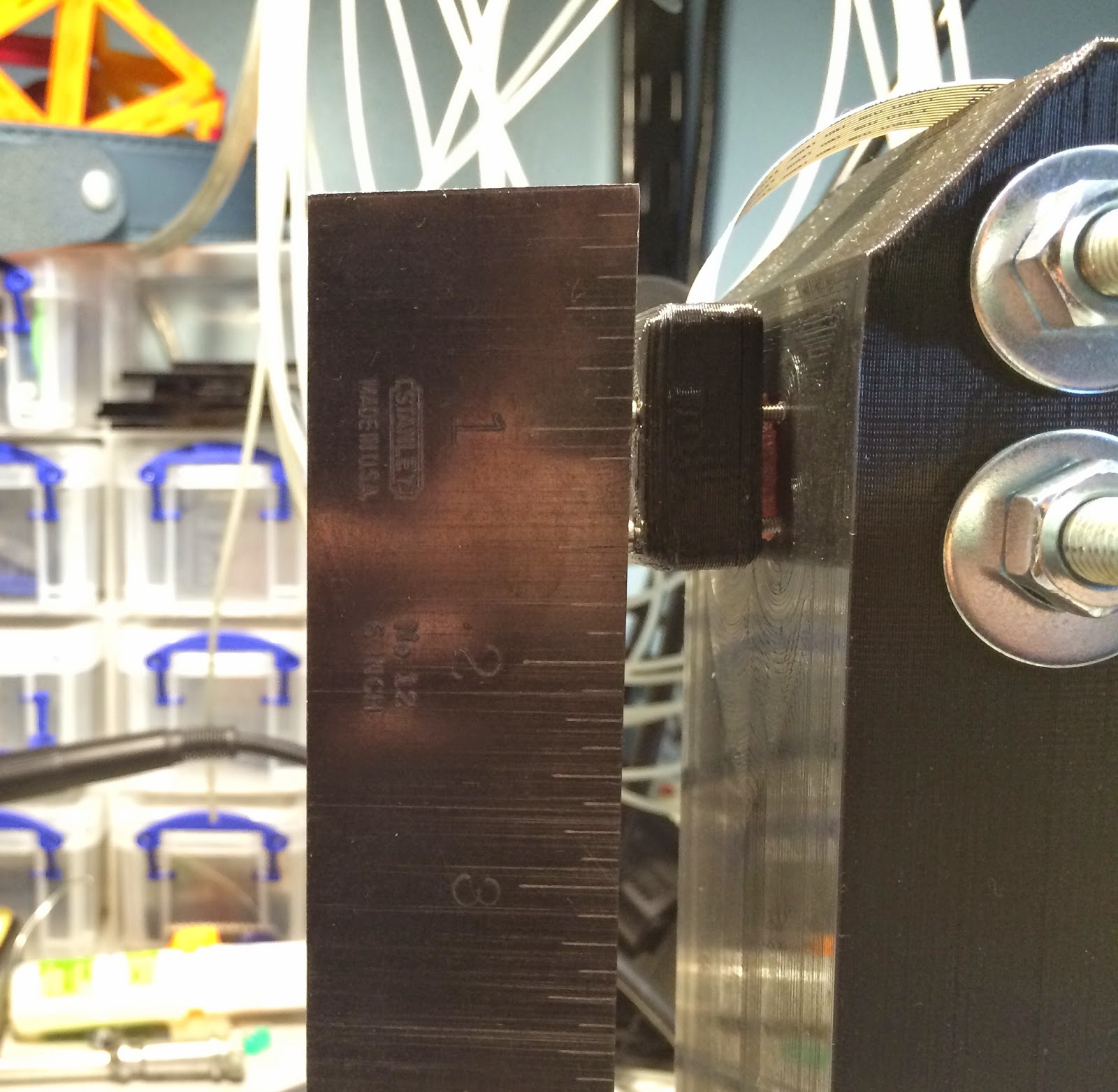 Second, I set the square on the turntable with its corner at the center and went to the Camera page in the FreeLSS web interface, and made sure that the red crosshair was in line with the edge of the blade. The camera mount doesn't have the ability to make that adjustment; that's the limitation I mentioned above. Theoretically the squareness of the printed parts and the flat table should have ensured that the alignment was good, but it wasn't quite close enough. The simplest way to achieve that was to shim the right edge of the turntable with some folded paper. For a permanent solution I'll glue some paper to the bottom of the turntable, but I also need to make sure that my table is entirely flat, which it might not be.

The final adjustment was to make the camera point directly at the center of the turntable, which is easily done by loosening or tightening both screws on one side. Here's what the picture should look like once everything is lined up. 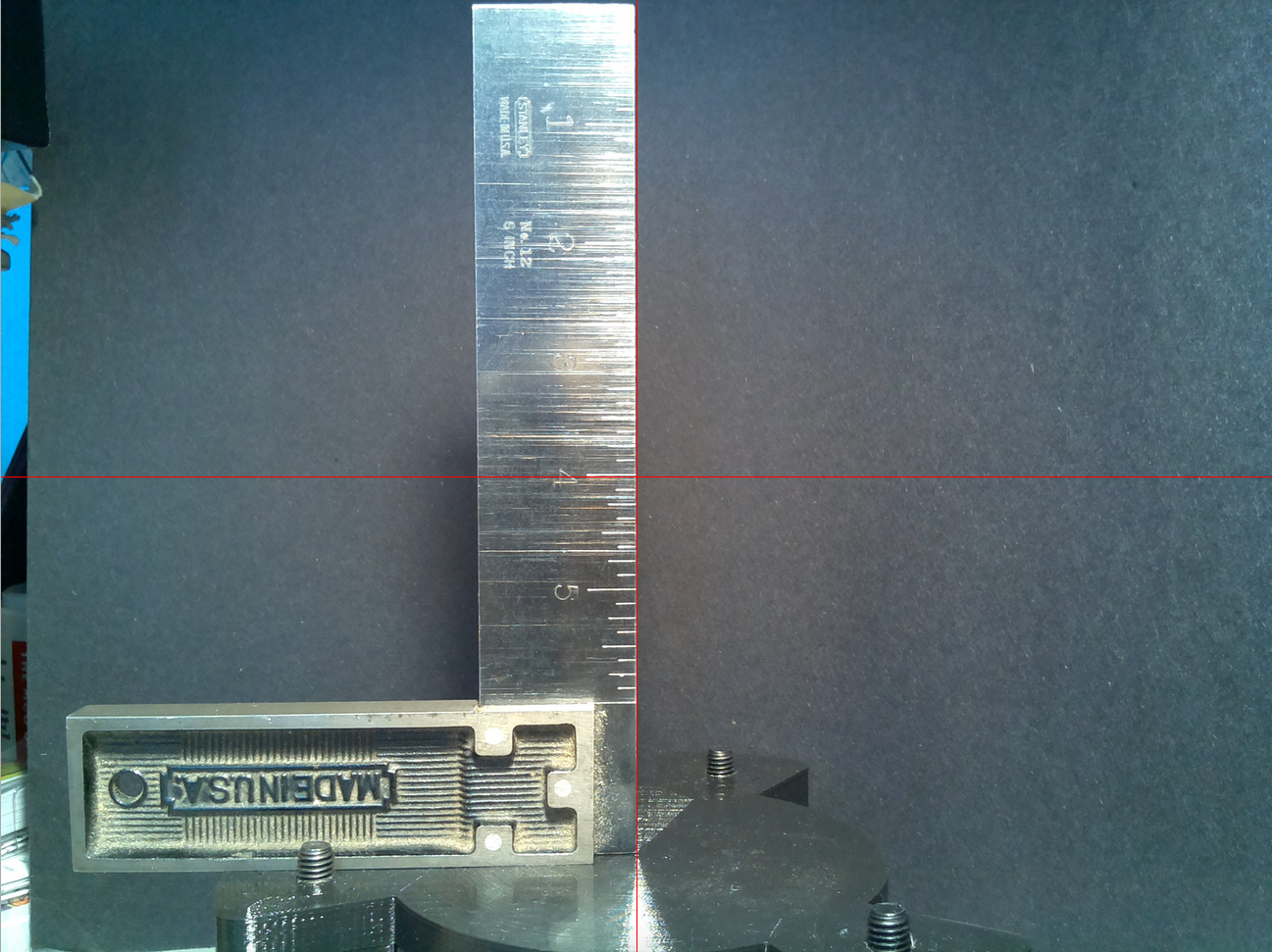 That completes the camera alignment, at least as far as I understand it to this point - if there's a step I missed, I'll be sure to edit this post to correct things. While I have the square on the turntable, though, I also line up the lasers. In the same FreeLSS page there are buttons to toggle each laser on and off, so I turn them on one at a time and make sure that they are focused, vertical and lined up with the very edge of the square. This is the result after both have been aligned. 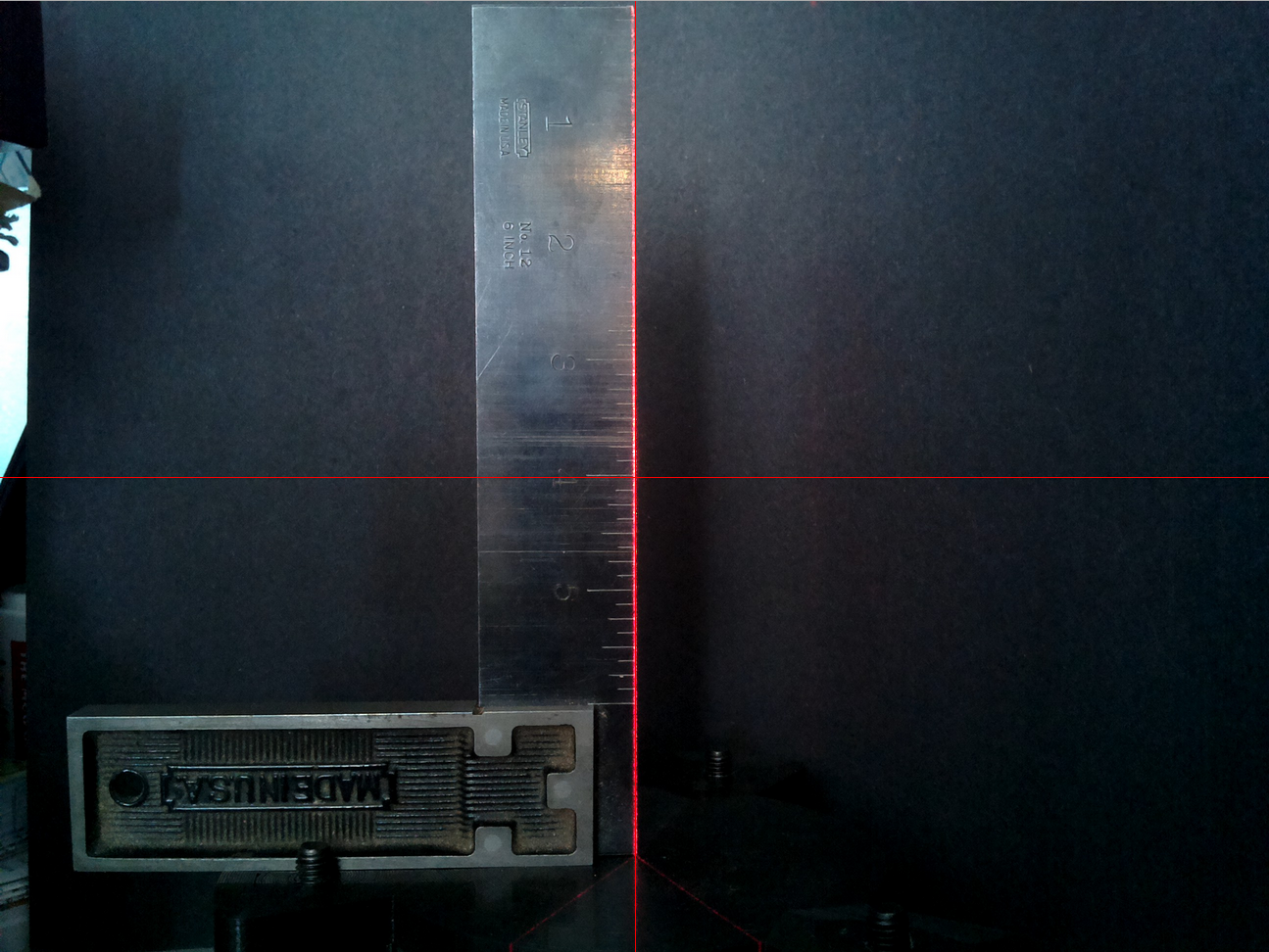 That's the whole alignment process, and once it is done the scanner should be ready to be measured for calibration.