You Need a Vernier Caliper

For the last couple of months our two operational printers have been spending most of their time printing parts for other printers; the OB1.4 has been especially busy since it can handle the larger parts, and has been upgraded with a heated bed to prevent warping (highly recommended, even if you only print PLA). But those parts are all done, so they've been looking for work. A couple of weeks ago I saw a jumbo-size geared heart printed by a friend, and decided that it would make a fine Christmas gift; I picked the PLA Heart Gears and put the OB to work. The first part looked great, and the next, but soon things started to go awry. The printer couldn't go more than a few minutes without the extrusion slowing, causing weak layers; sometimes it would stop entirely and ruin the print.

We'd had some similar issues printing the first GUS Simpson prototype, but I replaced the extruder with an improved version and a much better hobbed bolt, and since then had gone through three 2 kg spools of filament with no stoppages. So I started by tweaking the hot end temperature, then lowering the printing speed, trying to use shorter retractions, stopping retraction entirely, and a few other minor tweaks. Nothing really improved the situation, the print had failure after failure. I finally finished the heart late on Christmas Eve by editing the G-code files for two of the parts and printing just the portions after the jams, then gluing the pieces together.

Needless to say, this was very frustrating, not to mention painful - I had been babysitting the printer waiting for it to have a problem and my thumb was sore from trying to push the filament each time it began to jam! I knew that the printer wasn't having hotend issues, because every time I pulled back the jammed filament, cut it off and reloaded, it would extrude with very little pressure. After everything was done, I was determined to find the problem. I went back to the pieces that I'd cut off, the 30 cm or so that was inside the Bowden tube between the extruder and the hotend. It didn't look bad, but when I got out my trusty vernier caliper, here's what I saw. . . 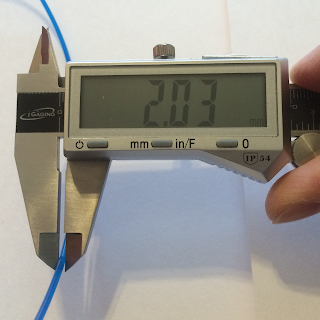 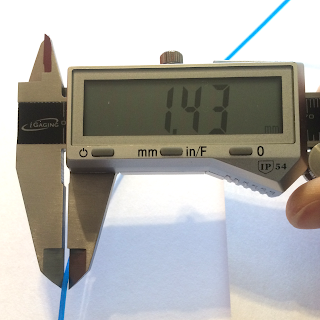 When I first unwrapped this filament I measured it, as usual, and saw that it was elliptical rather than circular; that is, it was significantly thinner measured one way than the other. That isn't a good sign, but it also isn't typically a big problem, as long as the average cross-section is consistent. In this section of the filament however, the measurements at those two points were 1.43x1.55 mm, and 2.03x1.92 mm. Keeping in mind that this is supposed to be 1.75 mm filament, that kind of variation is no good - on several levels.

When an object is sliced, the extruder movement commands are calculated based on an assumption about the volume of plastic that will be extruded for each millimeter of filament pushed forward. I'd told Slic3r to expect a circular cross-section with a diameter of 1.75 mm, so the volume in a linear millimeter is 2.41 mm3. On this filament where it measures 1.43x1.55 mm, the volume is 1.74 mm3 (28% too low) and at the fat section, 2.03x1.92 mm, it's 3.09 mm3 (28% too high). Such wide variation is going to result in weak spots that can allow the print to split apart and blobs that can cause the nozzle to drag through lower layers and pull the part loose from the printbed.

But what was killing my prints was the fat section. Our OB uses a J-Head hotend (a real one, from the designer) and it is drilled out to 2.00 mm diameter. The extra diameter doesn't sound like much, but when I tried pushing that section of filament into a spare J-Head, it wouldn't go in more than a centimeter without a lot of force, and pulled a section of the PTFE liner out when I removed it. It wouldn't fit in an Aluhotend or a Ubis either. The problem is that if you make the inside diameter of the hotend large enough to accommodate these kinds of variations, the filament will kink and jam.

By the way, I'm not going to name the manufacturer of this filament, because I bought it almost six months ago and it's possible they've improved their product. It was purchased on eBay at a very low price, $27.99 with free shipping, so I thought it was worth a try, but I've since discovered that the seller (who is apparently just reselling from an overseas factory) offers no guarantees on the filament diameter, and even goes so far as to claim that if their filament doesn't work it must be the fault of the printer, not the material. So this filament is going in the trash. I will name some of the places where we've bought high quality filament: ProtoParadigm, MakerGeeks, Printed Solid and Printrbot. They're all more expensive than the eBay seller, as much as twice the cost, but the key is that their product works (and won't end up in the garbage can). And even with those sellers I still measure the filament before the first print, just to see. . .