The wind and the weather

I love watching the weather, and as a result I'm addicted to the Weather Underground. Some time ago I started to notice a strange thing on their weather radar map; what looked like strong radar echoes south of Buffalo, changing slightly as time passed, but never moving. I filed it away as an oddity until I accidentally came across this page from the National Weather Service. It explains the mystery; the echoes are from the blades of wind turbines, miles away from the radar but still visible to it as they swing through the air. Since the radar is designed to pick up moving things, it's quite adept at locating the wind farm, over and over again.

More recently another set of fixed echoes appeared, much closer to home: 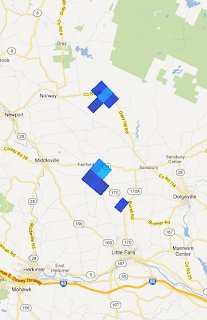 On a hunch I started searching, and soon enough found the Hardscrabble Wind Power Project and their Revised Map, which lines up quite nicely: 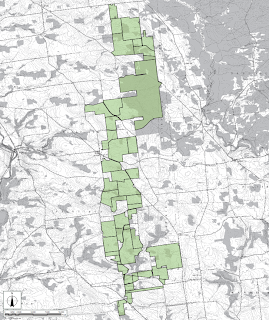 I expect that we'll see more and more of these, which as a weather watcher is somewhat distressing. But as it happens I'm a big fan of renewable energy as well; we've been paying a little extra on our power bill for years now in order to buy wind power from another farm nearby. One that, incidentally, doesn't show up on radar. . .
Posted by Bill Owens at 7:33 AM