I've been playing with 6 meters for a couple months now, since I got tired of my Yaesu FT-991 sitting idle over the summer (in the winter it's been one of my AM DXing receivers). I started by cutting down an old 10 meter dipole that my father (N2RJB) had made around 30 years ago, using a balun from a now-defunct company called Van Gorden Engineering, and immediately started making FT8 contacts! Of course, that was blind luck; I had turned on the station when the band was open, and it closed down 35 minutes later.

Days passed... I couldn't stop them! Three days later I made two more FT8 contacts, about an hour apart, then nothing, then six more in 48 minutes the following day. Then 20 in one afternoon! Four days of silence, then 14 more in two hours. Then four contacts... over three weeks. Another opening yielded 13 in an hour and twenty minutes. All of this with 15 watts and a dipole, which I should mention is mounted indoors, hanging from an unused plant hook above the desk in my first-floor home office.

Then came the September VHF contest, and I decided I had to get a little more serious. I didn't trust the indoor antenna at any higher power, and I knew it was fairly deaf compared with other local stations on pskreporter.info so something outdoors was called for. I could drag the dipole outside, but didn't have any good location for it. However, I did have this: 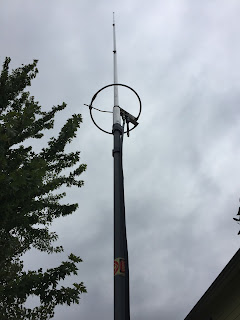 It's a Cushcraft (ie. MFJ) AR6 Ringo, which Dad had bought without realizing how BIG it is. So after a time leaning against the wall in his dining room (in the box!) he handed it off to me, whence it spent a longer time leaning against the shelf in the basement. I happened to have an old Radio Shack roof tripod and a couple sections of tubing, so up it went. 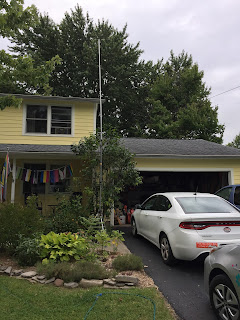 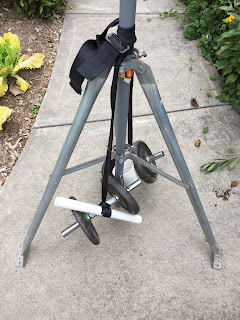 A piece of coax sneaking through the window, and we were ready for action... of which there wasn't much. I've heard that sometimes the contest lines up with spectacular propagation, but not this time, at least not for me. I could hear stations in the Northeast, but that's about it, and even with triple the power, a whole 45 watts, they could only sometimes hear me. Clearly a lot of the contesters are running a lot more power and directional antennas; I'm learning that I need to jump in on the tail end of their contacts when they're pointing my direction, and then I have much better luck.

In the end I submitted a log with 12 contacts and 6 multipliers, which is enough that I might not be at the very bottom of the standings. It did result in one new state and three grid squares, so that's not too shabby.

And since then I've left the FT-991 connected to the dipole and heard... nothing. Not a single station calling since the contest ended, and nobody answering my CQ. Waiting for some more magic!